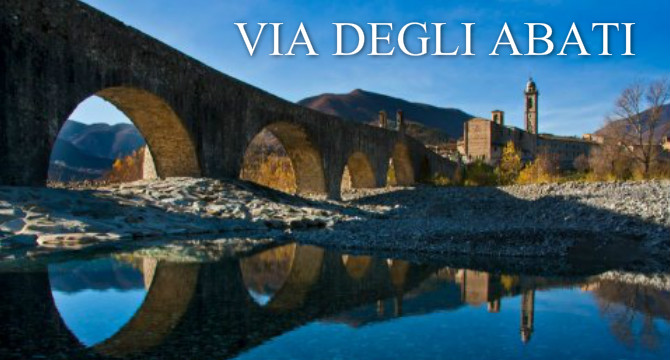 Abbots Way is the modern name ascribed to an ancient medieval thoroughfare, recently rediscovered, that links Pavia to Pontremoli for a total of 195 kilometers. The entire route, pinpointed through the reading of texts and visits to the area by Giovanni Magistretti, a man passionate about history, is marked by medieval discoveries in some ancient structures, including towers, castles, fountains, chapels, and roads paved in stone. The road is used by hundreds of hikers, bikers and riders, with numbers increasing each year. The route is the remains of the path used by the monks to travel between Pavia and Pontremoli using places such as Bobbio, Boccolo dei Tassi, Gravago and Borgotaro to rest and/or change horses.

The historical route of the Abbots Way winds through specific points where monks' cells, hospices and properties of the monks of Saint Columban are located. The places crossed by this path are those cited in The Diplomatic Codex of the Bobbio Monastery, namely Boccolo dei Tassi, Borgotaro, Borgallo and Pontremoli.

The coming of the Lombards in Italy in 568 AD, and the rapid progress of their conquest, brought in a short time to move the capital from Cividale del Friuli to Verona and then to Pavia, while the descent towards the south of the peninsula was favored by extensive monitoring of the road conditions. With this in mind, especially for the still arian King Agilulfo and for his wife Teodolinda, already christian, they began the foundations of convents and monasteries along major roads. The assignment by the King of lands in Bobbio to Columban in 613, lands not so far from the changing borders (limes) that separated Liguria and Western Emilia, was part of a political plan that contemplated an overlay and replacement of powers. Populations, probably already christianized by the Bishops of Piacenza, Pavia and Bobbio, but often came back to the paganism after the events followed the final collapse of the Roman empire, now met on their way a saint monk that not only brought them back to the true faith, but that was acting in that place at the behest of the king.

The Bobbio monastery was founded by Saint Columban in 613 AD and represented from the VII to the XI century a centre of culture and civilization for all of Northern Italy. It was a formidable tool for the Lombardy kings to penetrate the complex system of power, whose influence was beginning to diminish. The abbots of early periods were people of a high cultural, political and religious level and also of international stature, who took on ever higher posts.The most important and famous abbot, Gerbert of French origin, actually became Pope under the name of Sylvester II. The monks went out from the monasteries to preach to the people and, at the same time, to bring security, improve the land and teach cultivation techniques. In fact, monks were the first to introduce crop rotation, the cultivation of the vines and the use of medicinal herbs. They obtained political and economic power over these influential areas, first from the Lombardy kings and afterwards from the French kings. Around 900 the monastery of Bobbio owned numerous estates all over Northern Italy, some of the most important being in the Ceno and Taro valleys and in Tuscany. In those times the abbots used this route frequently to reach Rome for meetings with the Pope to discuss struggles with competitors such as bishops and councils who were jealous of their economic power. For the same reason they had also to travel to Pavia to meet the king, their protector. Finally, Irish travelers, churchmen and laymen, on their pilgrimage to Rome, also relied on this route to include stops in Pavia and then Bobbio in order to visit the tomb of Saint Columban. This has been an important road, especially as long as the Byzantines had possession of the fortress at Cisa and controlled that pass. Then, in the X century, the way now known as Franciscan Way of Sigerico became the principal route and this marked the beginning of the decline for Bobbio lands. After the year 1000 AD, this abbey witnessed deep religious spirituality, a flourishing spirit of commerce, art and culture. Policy was organized at inter-regional level, from Genoa to Venice, Lombardy to Monferrato, Emilia to Lunigiana and as far south as Lucca.

From this research was born the Abbots Way Association (www.viadegliabati.com) that maintains the entire route and every spring the Association Lupi d’Appennino organizes the Apennines ultratrail Bobbio-Pontremoli length 125 km.

Geography, history, the call of ancient civilizations, a deep love for the nature and the gifts of its everlasting beauty, sagas, works of art and heritage of past generations...
The fascination of landscapes of towers, castles, watchtowers in ruins and fortresses, churches and parishes, monastery cells, hospices, natural oases, hostels, common country inns...
Illustrious families and characters, anonymous pilgrims, religious devotion, business-like and mercantile workmanship, a passion for knowledge and culture...
This is what you can find travelling on this road.

A ROAD FULL OF TASTE

The Abbot's Way itinerary is filled with history, art and culture; however, it is also an itinerary where taste plays an important role.  In the more than a hundred kilometers that join Pavia to Pontremoli, the gastronomic traditions of the Trebbia valley, the Lunigiana, the Taro and the Ceno valleys are very much alive. Traditions that stem from history and which have reached us unaltered thanks to the passing on of the “food art” from mother to daughter.

The territory of Pavia is a meeting of cultures and traditions that are blended in the local cuisine as rich and varied from area to area. The Oltrepò hills, that hide history and tradition, also offer the pleasure of the table, starting with cured meats like Varzi salame that boasts the Protected Designation of Origin. The first courses are predominantly risotto and ravioli with risotto alla certosina and risotto with frogs being typical. The meat filled ravioli are often eaten in a clear soup but locally sourced ingredients such as chestnuts can be used along with mushrooms and truffles to give an extra touch to recipes. Among the main courses of the richest traditions in the area are farm animals, once reserved for the holidays. The gastronomic tradition of Oltrepò fits well with the wide assortment of wines, by the sparkling whites, the reds and the very special dessert wines.

Bobbio cuisine, due to its geographic position, is influenced by culinary traditions of Emilia, Liguria and Piemonte. Among typical specialties of the area are Bobbio snails in mushroom and vegetable sauce, roast veal – usually available during spring – beef roast pot and various types of salamis and cheese. Among the most famous first course dishes you have Bobbio maccheroni which are handmade, with the help of a knitting needle, accompanied by a hare and beef roast pot sauce, tortelli con la coda (tortelli with oxtail) and anolini (stuffed pasta cushions in broth). The typical desserts are little round biscuits with a hole in the middle and almond cake.

From the Trebbia valley to the Nure valley, famous mainly for its mushrooms which obviously influence the Nure valley dishes: tagliolini pasta with mushrooms, mushroom omelet and stewed gallinacci mushrooms. Game dishes are also frequently found and very popular, for example, salami of hare casserole. Another popular dish is cooked maize flour (polenta) layered with a meat and vegetable sauce, cooked in the oven and dusted with mountain cheese. Mushrooms are also a reference point for the Taro valley cuisine, which is famous both for first and main courses. Other typical ingredients of this cuisine are chestnuts and beet tops.

On the other hand, the cuisine of the Upper Ceno valley is simpler and less sumptuous than that of its lower valley sister, which has been “contaminated” by the great Court cuisine; yet the superb quality of the raw materials and the authenticity of the flavors make it unique. Cooked maize flour enriched with stews or succulent fried lard; savory potato caked, rice, cabbage, pumpkin, chestnut pudding and hot roast chestnuts to savor while sitting in front of an open fire during cold winter evenings. There is pasta with walnut and fresh mushroom sauce to be eaten in season. The most common dish is tortelli of herbs with butter and grated cheese, the Parmigiano. In Bardi you can find farms producing an excellent Parmigiano of mountain. For the more refined palates, there is also black truffle with excellent game: hare, wild boar, pheasant and partridge. Those who like fish can also taste baked or stewed Ceno trout. Not to forget wild berries such as strawberries, blueberries, raspberries and also honey from spring blossoms.

A festival of Porcino mushroom takes place every year in Borgotaro in September. The Porcino mushroom or boletus of Borgotaro is characterized by an intense aroma and a clean odor, not spicy. It has no taste of hay, fresh wood or licorice, and this allows to savour the perfume of wood and damp earth at its best. In 1993 the Borgotaro Mushroom has been awarded the IGP (Geographic Protected Indication), a very important European acknowledgment, confirming the worth of this characteristic product of our mountains, protected by the Consortium of Borgotaro Mushroom. It is used in different recipes, excellent raw and chopped into very thin slices, it can be fried in oil or grilled and it is perfect served with polenta, tagliatelle, rice, potatoes tortelli, meat for roasts and tasty escalopes. Worth are try is also the porcine mushroom soups.

In Pontremoli you can taste the typical dishes of the Lunigiana, including various specialties, starting with savory vegetable cakes, many ways to cook chestnut flour, wheat flour gnocchi, mushrooms filled with herbs, leeks and potatoes, finally the spongata cake. Another specialty is testaroli, made from water, flour and salt and cooked in the special pot named testo, and the amor, delicious cream puffs.